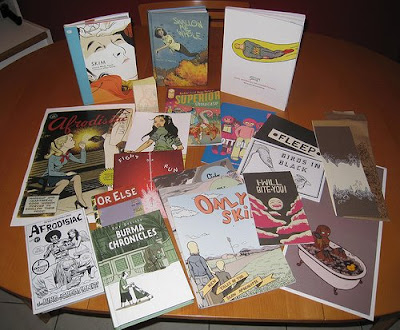 My reapings from another fun SPX:

Skim by Mariko & Jillian Tamaki (signed by both!)

I Shall Destroy All The Civilized Planets! : The Comics of Fletcher Hanks (signed by the editor)

Burma Chronicles by Guy Delisle (didn't buy it there, but I like to emphasise how much I dig Delisle)

Or Else #5 & Fight or Run by Kevin Huizenga

I Will Bite You by Joseph Lambert (signed)

Birds in Black by Zach Huelsing

Comics from Mars by Paul Pope

Afrodisiac #1 by Jim Rugg (signed) and that nifty print to the left...

Robot Bath print (to the right) by Joe Quinones